A Rainfly with a Woodie

I finally bought one of those "EZ-up knockoff" freestanding canopies, of which there are many brands now. [But take one guess as to where they're all made, of course...]
This 10x10 was on sale for $120 or so at Sports Authority, and may still be as you read this. 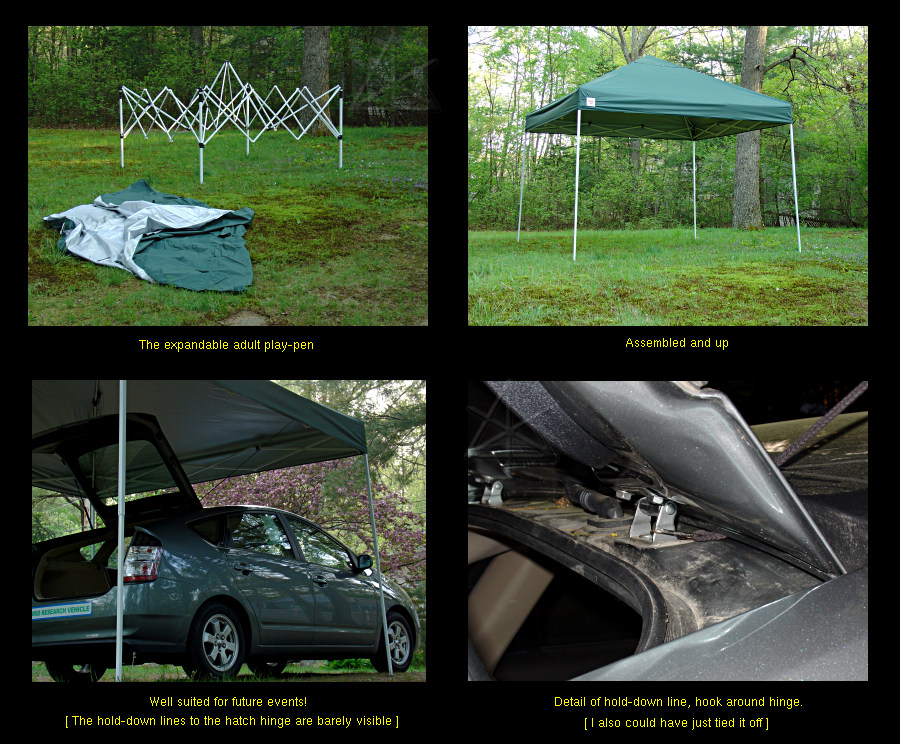 But I soon noticed a fairly serious design flaw, probably shared by every such canopy regardless of maker. [Actually, that's not entirely true -- the original EZ-UPs have side-to-side braces that extend, but they also have the drawback of additional frame bulk and a single center-pole that tends to let the canopy accumulate water.] But anyway, we're presently concerned with how to remedy *this* one's little problem. The problem:

[a little hard to see here, simply because of perspective]
The horizontal spans have very little side-to-side rigidity, partially because there are so many joints with pivot play ...

and nothing to resist the stress on the corner spider. The sides can bow in a frightening amount, that actually bends the nylon attachment points, with very little force. A gust of wind would push much harder. The spans tend to be constrained against bowing *outward* due to the edge of the canopy hooked over them, but there's absolutely nothing to prevent bowing in. I thought, there's no way I'm going to trust this to get me through a summer of events without getting turned into twisted wreckage around my head some afternoon. [As has, indeed, happened to other people with these things.]

In short, the thing is flaccid, even when erect.

They need slightly slanted 45ish-degree notches, done in a fugginugly hack-job way with multiple circ-saw cuts and then hand-chipped out with a chisel. At every pivot point in the canopy frame, the member to the inside always has the positive slope when viewed from inside. Thus, the notches can be made all the same and then it doesn't matter which way the piece goes.

After a little cleanup, $5 worth of screw-eyes added to all the ends, and eight nails with the points dulled down...

I've got a 4-corner bracing system that almost completely eliminates the bending, or at least transmits the force to the *whole* frame and keeps all the joints at 90 degrees. The remaining center spans can now withstand much more inward side force.

Detail of end attachment. The nail just drops through and sits.

A little personalization of the canopy, and now it's *really* ready for upcoming events. Two of the stiffeners even fit into the canopy bag; all four is too tight, but the other two carried separately is fine. The real question is why all the canopies aren't made with something like this in the first place. It could be done any number of ways; I chose a method that doesn't involve drilling or modifying the frame and uses junk I had laying around the house.

Some slimy corporation will probably come across this page and use the idea to "distinguish" an upgraded product and make a ton of money, and I'll of course never see a dime from it. That's the american way. But whatever; maybe this will help a other few people who own these things buy FEWER of them because they'll have, ah, better staying power.